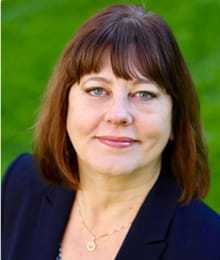 Ms. Rasmussen has been with the firm since 2015. Ms. Rasmussen was born in Sacramento and her grandfather was a welder for Southern Pacific Railroad in Roseville.

Prior to becoming a lawyer, Ms. Rasmussen was an international professional opera singer based in New York City and Cologne Germany. She went to college at California Institute of the Arts where she received her Bachelor of Fine Arts in vocal performance. After graduation, she also attended the University of Southern California’s advanced opera program. Ms. Rasmussen received her opera training in Los Angeles and in the San Francisco Opera Merola Program. As a mezzo-soprano, she sang in most major houses in the U.S. and Europe including the Los Angeles Opera, New York City Opera, Paris Opera, Glyndebourne, Welsh National Opera, and Cologne Opera. She also sang with many international symphonies including the San Francisco Symphony, New York Symphony, Los Angeles Philharmonic Symphony, Cleveland Orchestra, Israel National Orchestra and at the BBC Proms in England. Ms. Rasmussen’s recordings can be found at Decca and Sony Classical and her videos can be seen on You Tube.

After September 11th, Ms. Rasmussen wanted to return to her roots in California and learn more about the law and international politics. She retired from opera and went to law school at Golden Gate University in San Francisco, where she specialized in criminal law and trial work. Ms. Rasmussen was an editor of the Law Review, on the Dean’s list, and competed in the national Mock Trial program. Upon graduation she received the Judge Lee Baxter Litigation Fellowship where she worked for one year with students preparing them for Mock Trial competitions. Throughout law school, Ms. Rasmussen clerked for Kamala Harris at the San Francisco District Attorney’s Office and for Magistrate Judge Wayne Brazil. As an attorney, Ms. Rasmussen began her career at Brayton Purcell representing victims of Mesothelioma. She then worked for Brent Coon & Associates where in addition to handling toxic tort cases, she began working on FELA, whistleblower and labor cases. She has litigated cases in California state and federal courts, Arizona, Oregon, Nevada, Texas, and Colorado.

Ms. Rasmussen is a member and current Chair of the Railroad Litigation Section Executive Committee of the American Association of Justice (AAJ). She is the past Vice President of the Women Lawyers of Alameda County and founding member of community committee NEST (Niles for Environmentally Safe Trains). Ms. Rasmussen is licensed to practice in California state and federal court. She is a member of the Academy of Rail Labor Attorneys (ARLA), the California Employment Lawyers Association (CELA), Consumer Attorneys of California (CAOC), and Alameda-Contra-Costa Trial Lawyers’ Association (ACCTLA). She continues to volunteer her time serving as a mock trial judge and has written articles for the AAJ Trial Magazine and the Women Lawyers of Alameda County newsletter.

For fun she teaches Pilates and Spinning and tries to control her Goldendoodle puppy, Hank.