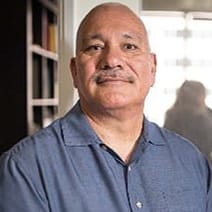 Diego Rojas was born in Puntarenas, Costa Rica. In 1962 the family moved to San Pedro, California, to be closer to their father who was working as a fishermen on the tuna boats. In June of 1974, Diego graduated from San Pedro High School and shortly after that he enlisted in the US Army. After completing his 3 year term and getting an honorable discharge, Diego hired out with the Southern Pacific Railroad in 1978 in the Maintenance of Way department. In 1979 he transferred to train service, and remained there until he sustained a disabling injury in 1991. He retained Designated Legal Counsel to resolve his FELA claim against the Southern Pacific Railroad and thereafter wished to assist other injured railroad workers in their pursuit of justice. He has worked as an investigator with Hildebrand McLeod & Nelson since 2012.

Diego is married and has two daughters. He enjoys bike riding with his wife on the weekends along Southern California’s beaches.