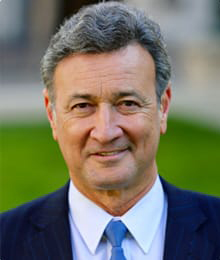 Victor Russo was born in Cleveland, Ohio and grew up in Los Angeles, California. He graduated from UCLA in 1980, and attended Arizona State University Law School for two years. He then transferred back to UCLA School of Law for his last year, in 1984, and volunteered at a Legal Aid Clinic in Santa Monica. He learned that “Justice is open to everyone -  in the same way as the Ritz Hotel” -  attributed Judge Sturgess. Mr. Russo knows that access to justice begins with attorneys who are willing to represent individuals, in times of need. Those who cannot afford to pay for a lawyer can only protect their rights if they can find one willing to go to bat for them. To level the playing field, he has therefore dedicated his practice, from the beginning,  to representing victims of negligence – those  who often must take on corporate interests and big insurance companies, on a contingency fee basis.

For over 30 years, he has been asked to speak at union meetings to inform workers of their rights and has represented union members of virtually every craft working in the railroad industry. He has also served on steering committees for Plaintiffs’ Counsel for the 2008 Chatsworth Metrolink,; the 2005 Glendale Metrolink;  and the 2002 Placentia BNSF/Metrolink disasters and complex litigation, all on behalf of commuter rail passengers and their families, for the serious injuries and deaths caused by railroad company negligence.

He has obtained numerous million and multi-million dollar verdicts and settlements, including the first verdict obtained on behalf of a pedestrian killed by an MTA blue line train, and the first MTA victim killed at a road crossing. He has successfully tried lawsuits in State and Federal Courts throughout the Southwest.

Mr. Russo is also a member of ARLA, the Academy of Rail Labor Attorneys. This professional association of attorneys represents injured railroad workers and  their families. ARLA upholds the right to a jury trial for the injured worker and provides continuing legal education through seminars and other educational programs. It also actively promotes rail safety and protects the rights of injured railroad workers and their families by participating in critical cases throughout the Courts of Appeal and United States Supreme Court.